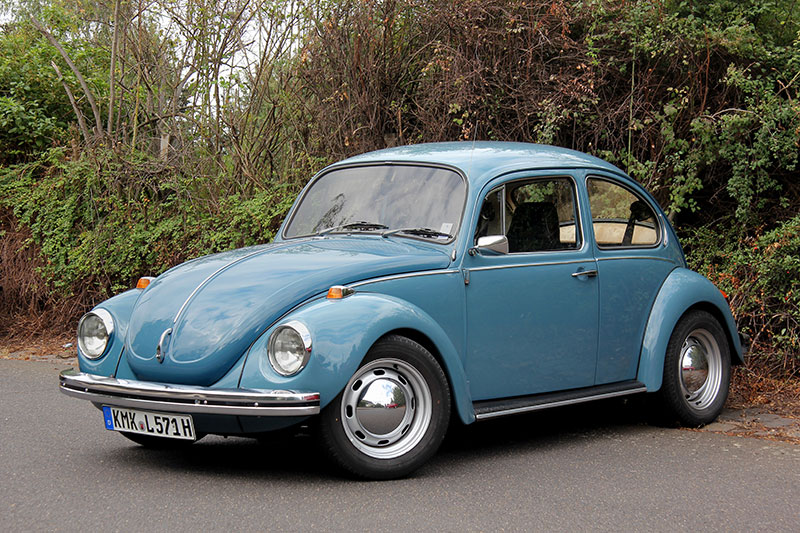 The Volkswagen Beetle—officially the Volkswagen Type 1, informally in German the Käfer (meaning “beetle“), in parts of the English-speaking world the Bug,[11] and known by many other nicknames in other languages—is a two-door, rear-engine economy car, intended for five occupants (later, Beetles were restricted to four people in some countries),[12][13][14] that was manufactured and marketed by German automaker Volkswagen (VW) from 1938 until 2003.[15]

Although designed in the 1930s, due to World War II, civilian Beetles only began to be produced in significant numbers by the end of the 1940s. The car was then internally designated the Volkswagen Type 1, and marketed simply as the Volkswagen. Later models were designated Volkswagen 1200, 1300, 1500, 1302, or 1303, the former three indicating engine displacement, the latter two derived from the model number. The car became widely known in its home country as the Käfer (German for “beetle“, cognate with English chafer) and was later marketed under that name in Germany,[4] and as the Volkswagen in other countries. For example, in France it was known as the Coccinelle (French for ladybug).[1][2]

Over time, front-wheel drive, and frequently hatchback-bodied cars would come to dominate the European small-car market. In 1974, Volkswagen’s own front-wheel drive Golf hatchback succeeded the Beetle. In 1994, Volkswagen unveiled the Concept One, a “retro”-themed concept car with a resemblance to the original Beetle, and in 1998 introduced the “New Beetle“, built on the contemporary Golf platform with styling recalling the original Type 1. It remained in production through 2010, and was succeeded in 2011 by the Beetle (A5), which was also more reminiscent of the original Beetle.

In the 1999 Car of the Century competition, to determine the world’s most influential car in the 20th century, the Type 1 came fourth, after the Ford Model T, the Mini, and the Citroën DS.

Stories round about the VW Beetle | DW English

You can find out more about which cookies we are using or switch them off in settings.

This website uses cookies so that we can provide you with the best user experience possible. Cookie information is stored in your browser and performs functions such as recognising you when you return to our website and helping our team to understand which sections of the website you find most interesting and useful.

Strictly Necessary Cookie should be enabled at all times so that we can save your preferences for cookie settings.

If you disable this cookie, we will not be able to save your preferences. This means that every time you visit this website you will need to enable or disable cookies again.